A tornado has torn through parts of New Orleans and its suburbs, flipping cars, ripping roofs off homes and killing at least one person in a region that was pummelled by Hurricane Katrina 17 years ago.

Parts of St Bernard Parish, which borders New Orleans to the south east, appeared to take the brunt of the weather’s fury, and that is where the death happened.

St Bernard Parish officials gave no details on how the person died but said multiple others were hurt.

Rescue workers were searching through the suburban parish for more people in need of help, Sheriff Jimmy Pohlmann said. 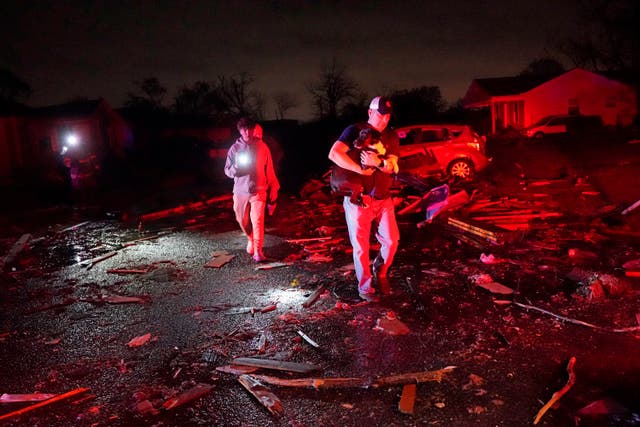 Claude Maher carries his mother’s dog, which he rescued with the help of firefighters (Gerald Herbert/AP)

Other tornadoes spawned by the same storm system had hit parts of Texas and Oklahoma, killing one person on Monday and causing multiple injuries and widespread damage.

In New Orleans, local television stations broadcast live images of the storm as it barrelled across the region.

The tornado appeared to start in a suburb and then move east across the Mississippi River into the Lower 9th Ward of New Orleans and parts of St Bernard Parish — both of which were badly damaged by Katrina — before moving north east.

Stacey Mancuso’s family had just completed repairs to their home in the suburb of Arabi after Ida ripped off the roof and caused extensive water damage.

Then Tuesday’s tornado tore through their street.

Mrs Mancuso huddled in her utility room with her husband, two children aged 11 and 16, and dogs as part of their new roof was lifted away by the wind.

“We’re alive. That’s what I can say at this point. We still have four walls and part of a roof. I consider myself lucky,” said Mrs Mancuso.

Tinubu to APC: Why Consensus candidate is a legal impossibility