Amid rising cases of COVID-19 infections across the country, the Federal Government, yesterday, said it was not considering a fresh lockdown. Speaking at the weekly ministerial briefing organised at the State House in Abuja, Minister of Health, Dr Osagie Ehanire, said the number of cases were not threatening enough for a lockdown to be considered.

On Wednesday night, the Nigeria Centre for Disease Control (NCDC) announced 790 cases of new COVID-19 infections. The figure was the highest in about six months, a sharp increase from the 610 cases it registered a day earlier.

A recent surge in infections has been partly attributed to the Delta variant, which is believed to be more contagious and deadlier.

The NCDC noted that states were struggling to curb the spread of the Delta variant, with the situation becoming alarming, particularly in Lagos, Akwa Ibom, Rivers and Oyo states.

In the meantime, a multi-sectoral national emergency operations centre (EOC), has been activated to coordinate the national response activities.

The NCDC warned that the Delta strain had shown its efficacy in infecting younger people as against the older strains of the virus.

Citing the effects of lockdowns on the economy, Ehanire said countries have been a bit circumspect in the decision to impose a total lockdown as was seen at the beginning of the outbreak last year.

He added that administrators would rather employ precision lockdowns on specific areas of the country that have come under threat.

“There’s no more generalised lockdown. So many countries do what we call precision lockdown. So that everybody will not be affected and there will not be too much damage to the economy and social life. And we are not at the level yet where we are feeling that threat to do any lockdown. We do not have that on the table right now.”

AS part of efforts to mitigate the effect of the third wave of COVID-19 in Lagos, the state government, through its Incident Command Structure, has fully activated 10 COVID Oxygen Treatment and Sample Collection Centres as well as 20 local council-based COVID Sample Collection sites.

Commissioner for Health, Prof. Akin Abayomi, who disclosed this yesterday while reviewing reports of operations, noted that the centres which were established during the hit of the first and second waves of the pandemic, have been reinvigorated to provide swift oxygen therapy to residents who require it and easy access to COVID-19 testing for citizens who needed to test for Coronavirus infection.

He explained that the 10 COVID Oxygen Treatment and Sample Collection Centres were established as dual purpose facilities and strategically located in 10 local councils with a high burden of infection cases to provide oxygen support and serve as COVID sample collection base to residents.x

“The reactivation of these centres and sites are part of the strategies adopted in response to the recent increase in COVID-19 infection occasioned by the third wave of new strains,” Abayomi said, adding that the state government is doing all within its powers to ramp up testing and improve on its management of Coronavirus cases by providing citizens with support and seamless access to quality and efficient care services to lower the curve of third wave and prevent the infection from further spreading.

MEANWHILE, the Minister of Health has urged resident doctors to call off their ongoing strike, saying that embarking on industrial action amid the third wave, cholera outbreak in 22 states and a Marburg virus outbreak is unconscionable.

This is, as he said that the Federal Government will enforce, the International Labour Organisation’s policy of ‘No Work, No Pay’, if the doctors continue the strike, stressing that doctors will not be paid from taxpayers’ money for doing nothing.

He also denied threatening to sack resident doctors who withdrew their services nationwide since August 2, over alleged poor conditions of service, explaining that all the engagements and consultations so far have been to appeal to them to call off the strike.

“There has been no threat. Nobody threatened anything. Just an appeal from us to the doctors, all of us went through the same residency. We are saying this is not the time for strike, let’s continue to talk about it. Do not put people’s lives at risk. That is what the Minister of Labour has been saying, that is what the Minister of Health has been saying. Nobody has threatened anybody with anything.”

The minister said most of the 12 demands raised by the striking doctors have been met by the government, while the others are under the jurisdiction of states, and not the Federal Government.

Ehanire said: “We have said openly that this is not a good time for doctors to go on strike. We are having a strike for the third time this year, which is not good. We have appealed to them. We have been having long meetings with young doctors to tell them that look, we have a certain responsibility to our country.x

“Every country that has a difficult situation at this time should understand that responsibility is on all of us. If you have any problem, any grudge, let’s talk about it. If we can’t solve it now, let’s continue talking about it until we find a solution, but don’t drop work.” 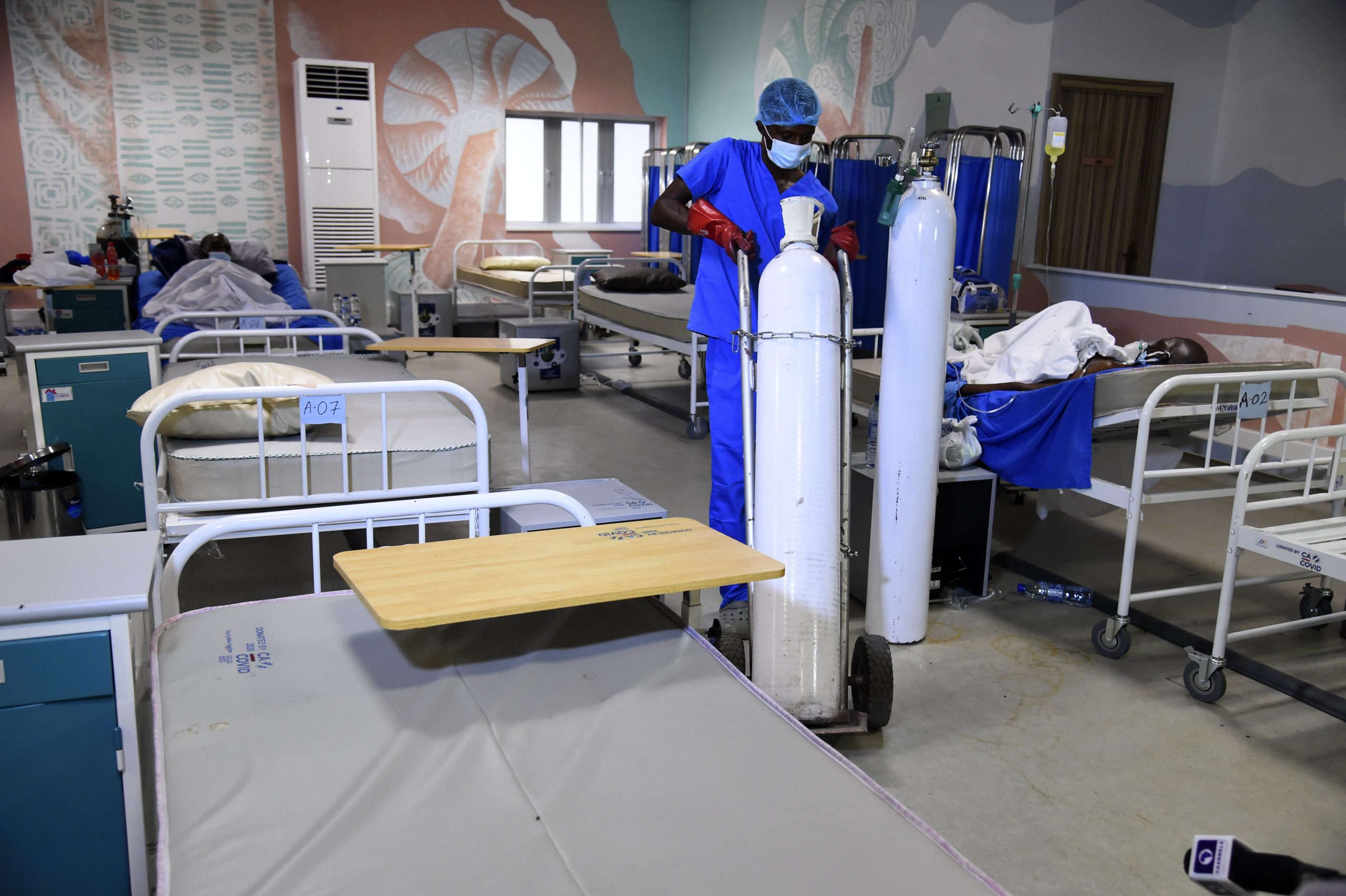 A Health official pushes an oxygen cylinder on a troley to treat COVID-19 patients suffering from acute respiratory challenge at a ward in Lagos State Isolation Centre in Yaba, Lagos(Photo by PIUS UTOMI EKPEI / AFP)

When asked about the no-work no-pay threat, the Minister said: “Yes, but that’s a standard thing. That’s the International Labour Organisation recommendation that if you did not work, then why will you expect pay?

“Your salary comes from taxpayers’ money. So, if you did not work, why should you be paid? Because if that is so, you can be encouraged to stay home for six months and your salary is running from public funds, from taxpayers’ money, when you have not given the community any service. You can’t go to the market and buy something for nothing. You must put down something, you must put down work.”

AS the pandemic hits harder and spreads faster, Nigeria is expected to step up its vaccination program after receiving over four million doses of the Moderna vaccine from the U.S. government last week.

The second phase of the national vaccination programme is expected to kick-off on Monday, while more vaccines are expected.

Ehanire noted that Nigeria is not only relying on donated vaccines from other entities. According to him, Nigeria plans to procure nearly 40 million doses of the Johnson and Johnson vaccine through the African Union at the cost of $298.5 million.

He also assured those who have taken the first shots of the AstraZeneca vaccine of the availability of second doses by the end of August when 3.9 million doses of the vaccine type is expected to arrive the country.

According to him, since the price of the one-shot vaccine has dropped, Nigeria plans to facilitate the purchase of about 40 million doses of the vaccines in all.

HOWEVER, the Guild of Medical Laboratory Directors (GMLD) has said that Nigeria has no business importing vaccines, including the COVID-19 vaccines, as the country has the capacity, manpower and human resources to produce any human vaccine.

President of the Guild, Prince Elochukwu Adibo, who stated this when he visited the Chairman, FCT Council of Traditional Rulers and the Ona of Abaji, Alhaji (Dr) Adamu Baba Yunusa, said Nigerian medical laboratory scientists produced small pox vaccine at the Yaba Vaccine Centre, supervised by World Health Organisation (WHO), not only for Nigerians but for the entire West African citizens in the 60’s up to early 90’s and wondered what went wrong with the Yaba human vaccine centre.

He said: “Like every other institution of government in Nigeria, the vaccine centre was mismanaged.”

Adibo, who decried the global politics on COVID-19 vaccine, urged the government as a matter of urgency, to resurrect the vaccine centre in Yaba, Lagos, because any nation that depends on foreign vaccines, is toying with the health of its citizens, considering that the global politics on vaccine production, availability and accessibility is not favourable to under-developed nations.