Gunmen with explosives stormed a Catholic church and opened fire in southwest Nigeria on Sunday, killing “many” worshipers and wounding others, the government and police said.

The violence at St. Francis Catholic Church in Owo town in Ondo State erupted during the morning service in a rare attack in the southwest of Nigeria, where jihadists and criminal gangs operate in other regions.

The presiding priest was abducted as well, said Adelegbe Timileyin, who represents the Owo area in Nigeria’s lower legislative chamber.Top articles on The Times of IsraelRead More

Authorities did not immediately release an official death toll. Timileyin said at least 50 people had been killed, though others put the figure higher. Videos appearing to be from the scene of the attack showed church worshipers lying in pools of blood while people around them wailed.

Pope Francis said in a statement he had learned of the “death of dozens of faithful,” many children, during the celebration of Pentecost Sunday.Get The Times of Israel’s Daily Editionby email and never miss our top storiesNewsletter email addressGET ITBy signing up, you agree to the terms

“While the details of the incident are being clarified, Pope Francis prays for the victims and for the country,” he said. 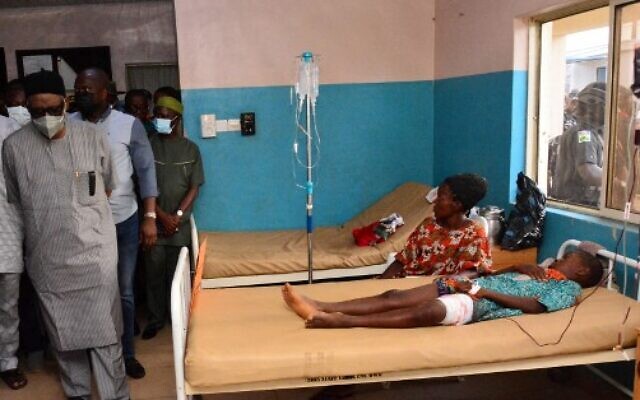 No group claimed responsibility for the attack.

The motives and the exact death toll were not immediately clear, but President Muhammadu Buhari condemned the “heinous killing of worshipers.”

“I was passing through the area when I heard a loud explosion and gunshots inside the church,” a witness, who gave his name as Abayomi said.

He said he saw at least five gunmen on the church premises before he ran for safety.

Attacks on religious sites are particularly sensitive in Nigeria where tensions sometimes flare between communities in a country with a mostly Christian south and a predominantly Muslim north.

Gun and bomb attacks are rare in Ondo state, but Nigeria’s military is battling a 12-year-old jihadist insurgency in the northeast, gangs in the northwest, and separatist agitation in the southeast.

Boko Haram jihadist group in the northeast targeted churches in the past as part of Nigeria’s conflict that has killed 40,000 and displaced 2 million more.

Kidnapping assaults are common in most parts of Nigeria but mass gun attacks like Sunday’s violence are rare in the country’s relatively peaceful southwest.

Ondo state governor Rotimi Akeredolu said Sunday’s attack was a “vile and satanic attack” and appealed to the security forces to track down the assailants.

The attack comes a day before the ruling APC party starts primaries for its candidate in the 2023 election to replace Buhari, a former army commander who steps down after two terms in office.

Security will be a major challenge for whoever wins the race to govern Africa’s most populous country and the continent’s largest economy.

Parts of northwest and northcentral Nigeria in particular have been increasingly plagued by heavily armed gangs who raid villages and target communities and schools for mass kidnapping attacks.

Tinubu to APC: Why Consensus candidate is a legal impossibility