Manchester City twice rallied to secure a 2-2 draw with Liverpool after a pulsating encounter between the previous two Premier League champions at Anfield.

Kevin De Bruyne’s left-footed shot pegged back the Reds for a second time after a sensational solo Mohamed Salah effort had put Liverpool ahead. The Egyptian held off Joao Cancelo before moving beyond Bernardo Silva and Aymeric Laporte to rifle in a right-footed drive from a tight angle.

Uncharacteristically passive in the first 45 minutes despite playing towards the Kop, Liverpool went ahead when Sadio Mane slotted home Salah’s through-ball, only for Phil Foden to respond for City.

Fabinho appeared set to put the Reds ahead once again only for a brilliant Rodri block to prevent him from slotting into an unguarded net, meaning a point apiece for both teams. 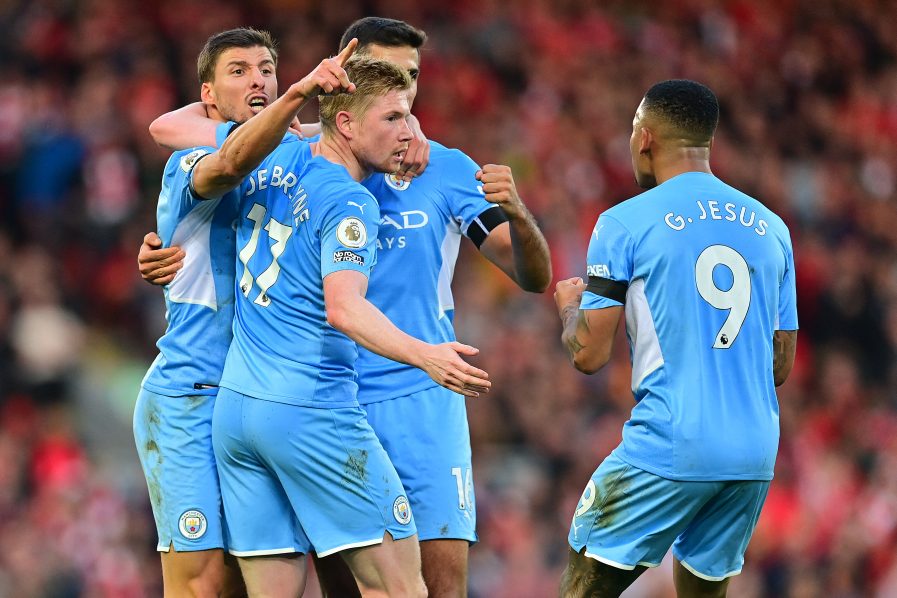 Their goals came from the unlikely sources of a coolly-taken finish from midfielder, Pierre Emile-Hojbjerg and an own goal from Matt Targett, who stabbed the ball home under pressure from Moura just four minutes after Oli Watkins had levelled for Villa in the second half.

READ  Why I Returned To Kano Pillars – Ahmed Musa

Brentford’s Yoane Wissa scored an added-time winner as his team maintained they’re fine to start to live in the Premier League with a dramatic London derby win at West Ham United.

Wissa, who got a late equaliser against Liverpool eight days ago, drove in a powerful shot with virtually the last kick of the game after the Hammers had failed to clear a set-piece.

For long periods, it was Bryan Mbeumo’s early goal that had looked likely to be decisive for the Bees, who move up to seventh in the table after leapfrogging opponents who are now ninth.

Thomas Frank’s side more than merited their lead, with French forward, Mbeumo sweeping in from close range after Sergi Canos’ effort was parried by the home goalkeeper, Lukasz Fabianski.

Brendan Rodgers’ side opened the scoring against the run of play when Kelechi Iheanacho capitalised on a mistake from Joachim Andersen before slotting past Vicente Guaita on 31 minutes.

The Foxes threw away a two-goal lead as the Eagles came from behind to salvage a point at Selhurst Park, leaving them on eight points from their opening seven Premier League games.

“They are giving everything but we just aren’t playing to our level,” said the 48-year-old.

Only four teams have created fewer shots per game than Leicester this season, and they are 13th in the expected goals per game table.

Eguavoen said he suggested to the NFF that Gernot Rohr shouldn’t be sacked.