Nigerian Air Force (NAF) said, yesterday, it would not be deterred by the death of its seven men killed in Beechcraft KingAir B350i crash on Sunday near Nnamdi Azikiwe International Airport, Abuja after reporting engine failure en route Minna.x

NAF gave the assurance in an exclusive chat with The Guardian, just as more Nigerians mourned victims of the crash.

NAF Beechcraft aeroplane had crashed on Sunday, killing seven persons on board. 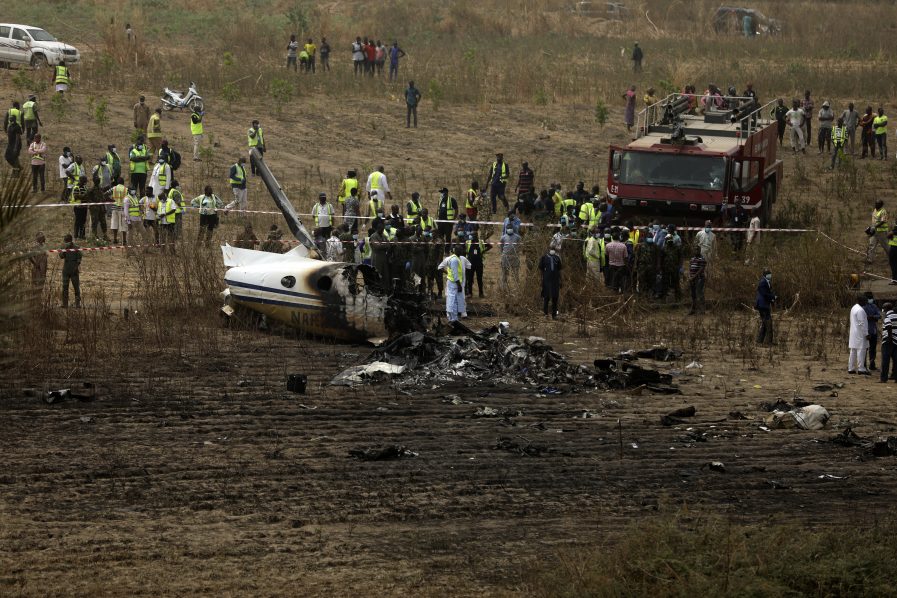 Caregivers work at the scene of an accident involving a Nigerian military aircraft which crashed killing seven occupants on board at the Airport runway near Nigeria’s capital Abuja, on February 21, 2021. – A Nigerian military aircraft Beechraft KingAir B350 has crashed killing seven personnel on board while returning to the Abuja Airport after reporting engine failure. (Photo by KOLA SULAIMON / AFP)
The aircraft crashed shortly after the perimeter fence of the Nnamdi Azikiwe International Airport, Abuja.

An eyewitness said the aircraft struggled for balance and started descending dangerously until it hit a mango tree close to a stream behind Bassa village close to the airport.

BUT NAF spokesman, Air Vice Marshal Ibikunle Daramola, told The Guardian, yesterday, that the crash would not dampen the morale of men and officers coordinating the air component of the war against terrorism, banditry and other criminal actions.

He said: “We can’t be deterred because it is actually one of the hazards of the job. It comes with some level of risks, so we are not deterred. While we mourn those who have passed, the job goes on and those who are involved will continue to do their job in relation to whatever task they are given.

READ  Zenith Bank becomes the Bank of the Year 2020.

Ortom described the crash and death of Air force personnel as unfortunate and painful.

He equally sympathised with NAF.

Olujimi, who expressed shock and grief over the death of Flight Sergeant Olasunkanmi Olawumi and other six Nigerian Air Force personnel on board the crashed aircraft, said in a statement she personally signed and made available to newsmen in Ado Ekiti, that thorough investigation be carried out into the cause of the crash.

She described the death of Olawumi, an indigene of her constituency, as unfortunate and shocking.

“Olawumi has an aged father who loves and dotes on him. The father is a great leader of repute.

“The late Air Force officer was a great guy and jolly good fellow who was so devoted to his chosen career. May God accepts his soul and grants him eternal rest.”